Art Appreciation classes on Mondays, once a month, after school 3-4.30pm.

Art Exhibition 2019 – In conjunction with the Criunniu na nOg

The art produced during 2018 was exhibited at the School  in June as part of Cruinniu na nóg events around Ireland & then in July went on show at Siar Gallery in Kinvara.

Hundreds of children from around the county took part in the Clare community games art competition in Ennis in February 2017. Our entrants did very well in the County finals.

Artist in the Classroom

Artist Sarah Fuller will be teaching the senior classes the artistry of puppet making once again. This term they are taking their inspiration from a painting by Pieter Brueghel the Elder. The children make a range of amazing puppets and have used them to create shows with various themes. Last year the children experimented with light and shade and with the use of different strength light bulbs they created wonderful affects. The younger children have also made wonderful puppets with Sarah.

An Art Appreciation & craft course is also offered to students for free after school from January/February. The course introduces some history of art and encourages the children to express what they have learned through different mediums and with their own interpretation influencing the final result. An exhibition of their work takes place in June.

Pictures below show a Still life and a Self portrait class as part of the Art Appreciation class run once a month after school between the months of February and June. The children are introduced to elements of art history using a PowerPoint presentation and it is followed up by practical work – the aim is to learn and enjoy!

Below: A small selection of 2017 Doodles which the children designed. 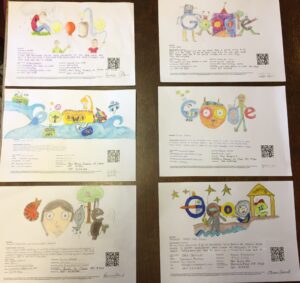 The next drama production is Joseph and his amazing technicolor coat. It’s due to be performed before Christmas 2018 by the senior room classes.

In December 2016, 3rd to 6th class students presented the musical ‘Oliver‘. Parents and the wider community were invited to the school to see an amazing performance. Well done to all the children and Muinteoir Carmel! 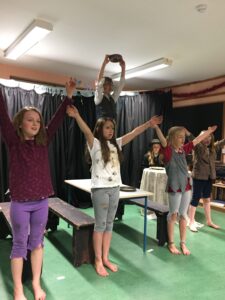 In April 2016 the senior room presented the ‘Triumph of All Sorts’ written by Damian White. The play centred around characters of 1916 Ireland. Here are some pictures below.

In March 2015 the seniors (3rd to 6th class) presented ‘Rats‘ aka ‘The Pied Piper of Hamelin‘ and performed on two nights for the local community.  The children are given the opportunity to write some parts of the drama themselves.

Most recent prizes won by our students

The School encourages creativity & learning in class and at home and several prizes have been won by New Quay School children.