Trip to Seamount’s production of Grease where the children saw past pupils of New Quay in action!

The Senior room tour visited Craggaunowen and the Atlantic Air Venture in Shannon. In Craggaunowen they saw how our ancestors lived back in the Bronze Age period and adapted to change. The children also heard more about St. Brendan’s voyage and were very interested in Tim Severins boat.  There were some interesting flights made by the children in the flight simulators as they pretended to land planes in New York City!  The Aviation Centre was of great interest also.

The Senior room also had an activity day provided by the Burren Outdoor Education Centre and thoroughly enjoyed an afternoon of Kayaking.

Áine Bird from BurrenBeo taught a course called Áitbeo and in June they went on a Fieldtrip with Áine.  A walk on Abbey Hill focused on the geology, nature and history of the Holy Well on the Green Road. Corcomroe Abbey and Cahermore Fort were also explored. Debate and discussion was very much encouraged during this course.

The Senior Room on History tour to remember the 1916 Rising in Dublin. 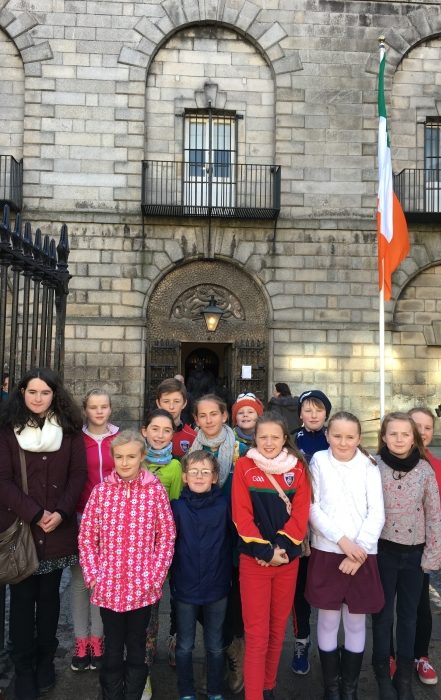